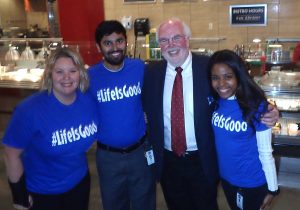 The November opening of the Downtown Kroger store brought more than a second supermarket to the Downtown core. It brought the return to Downtown of Larry Schultz, who spent 26 years at the helm of the long-time O’Malia Food Market in Lockerbie Marketplace and into its time as a Marsh Supermarket.

Schultz will be the manager of the Downtown Kroger, which opened as a Marsh Supermarket in May 2014 at 227 W. Michigan St. The facility was one of the former Marsh properties purchased by Kroger when Marsh declared bankruptcy.

Many long-time Downtown residents were surprised (as was Schultz himself) in March 2015 when Marsh transferred Schultz to head its Zionsville store.

“We are happy to say that Larry is now a member of the Kroger family,” said Eric Halvorson, manager of corporate affairs and media spokesman for the Central Division of the Cincinnati-based grocery company. “His will be a familiar face at the store – as will a number of his department heads. We are fortunate to have such talented and dedicated leadership for what we know will be a popular store.”

The Downtown Kroger was scheduled to open Thursday, Nov. 16 (two days after this issue of Urban Times went to press).