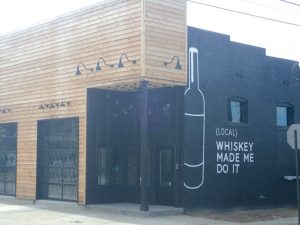 The intersection of 17th and Bellefontaine streets keeps getting livelier with the Nov. 3 opening of West Fork Whiskey just across the street from Cannon Ball Brewing Co. and the headquarters of King Park Development Co.

Co-owner Blake Jones called West Fork “a modern, intimate cocktail bar inside a whiskey distillery.” His partners in the operation are his brother Julian, and long-time friend David McIntyre.

The three men launched West Fork three years ago, operating the past two years from a Northwest-side warehouse. That time frame allows them by state law to operate a tasting room, while all production has moved to the new facility as well.

The 21-and-over establishment will offer a cocktail menu, whiskey by both the ounce and by the bottle. Paninis made by Cannon Ball Brewing will also be available. All syrups and juices are fresh and made in-house.

West Fork uses 100-percent Indiana ingredients, using no filters in its 256-gallon still. The partners currently offer two corn whiskeys and one bourbon, with plans for a rye whiskey in the works. The barrels are Midwest American Oak, coopered in Minnesota.

The three men describe their product this way: “Our spirits are 100% Indiana from grain to glass. We craft it our way. We pay respect to one of the best grain producing states in America and we toast to hard work and dedication with every glass.”

West Fork Whiskey is currently available in about 125 bars and liquor stores.

The recent opening capped a year-long renovation of the commercial building, which the partners chose, Blake Jones said, because “we love the redevelopment in the Kennedy-King area.”