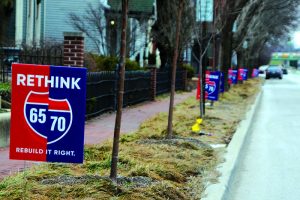 A coalition of neighborhood activists, Downtown businesses and urban design professionals have launched a major blitz to convince state officials to rethink the the current plan to tear-down and rebuild I-65/ I-70 through Downtown Indianapolis.

The Rethink 65/70 Coalition officially launched the campaign on March 8, urging people to write letters to the governor, state legislators and highway officials, and also pepper the area with yard signs – all signaling a sense of urgency as the Indiana Dept. of Transportation’s project moves forward.

Time is short, said Paul Knapp, CEO of Young and Laramore during the March 8 press conference. “INDOT speaks about the fact that they are only five months into the required two-year environmental analysis,” he said. “And that is true. But the way they have this project scheduled, the fundamental direction of the project will be set in stone this spring.

“After that, the public input will only be about mitigation – lipstick on a pig: prettier lights, more attractive block on 25-foot walls. The time to truly Rethink 65/70 is now.”

INDOT officials, on the other hand, believe that the Coalition advocates are wrong in thinking the state is entrenched with plans to widen the interstate and erect tall walls to the edge of the existing right-of-way.

Further, INDOT spokesman Andy Dietrich said the alternative plans promoted by the neighborhood-based advocates have indeed been incorporated into the planning process and will be duly evaluated. He also pointed out that INDOT has altered its timeline substantially to consider those alternatives. Dietrich also stressed that renderings made public by the Coalition are only based on assumptions made from initial INDOT drawings.

INDOT will continue the required environmental study phase of the plan, with June the target to begin determining the actual direction of the project. After that, public hearings will be held. Only then will the preferred design choice be determined, with construction probably to begin in 2020.

Regardless, leaders of the Rethink 65/70 Coalition believe the funds allocated to the interstate tear-down should be invested in a way that moves Indiana’s Capital City to the ranks of Great American Cities.

While there is skepticism over the INDOT planning process, no one is disputing the need for the 50-year-old Downtown interstate legs to be rebuilt. But, according to Marsh Davis, president of Indiana Landmarks, simply rebuilding a 50-year old configuration is not forward-thinking. He said INDOT’s initial phase will cost between $250 and $300 million dollars, but its overall plan will likely triple that cost when all phases are completed.

“It is imperative we rebuild in a way that provides equal or greater mobility for both commuters and residents, Davis said. He continued that the project should be revamped “to enable underutilized property along the current interstate to be valued investments, that offers new development opportunities by smart utilization of the right-of-way; and that fosters an urban lifestyle that attracts and keeps talent for our booming economy.”

“Our vision is for a reconstruction that helps take Indiana to the next level –a balance between transportation and quality of place as a transformative solution,” Davis added.

Coalition leaders believe that, should INDOT’s early planning be enacted, the impact on Downtown caused by the project’s widened bridges, added lanes and tall retaining walls threatens to damage the quality of life in some of  the city’s historic and under-served neighborhoods by creating a larger barrier between downtown and these areas. This very large investment will have a long-term adverse impact to the form and function of the city for generations to come, they said.

The goal of the Coalition is to leverage this very large investment into a new paradigm for transportation infrastructure that facilitates a vibrant community and region. Coalition leaders said the investment has a potential impact equal to or greater than the Indianapolis International Airport Midfield Terminal Expansion or Lucas Oil Stadium. Other major cities in the U.S. have been faced with the same question of what to do with urban highway infrastructure that has outlived its useful life. Those solutions have inspired the coalition to envision alternatives guided by economic development, quality of place, and smart transportation goals, Davis added.

Kevin Osburn of Rundell Enrstberger Associates said an estimate included in INDOT’s latest public document, “Frequently Asked Questions,” is indicative of the state’s preference toward the preliminary plans opposed by the Coalition and purposely misleading. INDOT used a similar project in Syracuse, N.Y., as an example of how much tunneling the Indianapolis Downtown interstates would cost – $3.5 billion, substantially more than cost estimates for the Indianapolis project. Osburn said, however, that the Syracuse project included boring a 1.5-mile tunnel through bedrock, not a problem here. “They have deliberately selected a misleading case study in order to scare the public and public officials with outrageous costs,” Osburn added.

The Rethink 65/70 Coalition is urging city officials, INDOT, the Governor’s Office and state legislators to support the development of an independent, comprehensive, objective, expert-led study of the feasibility, cost, and community benefits of alternatives to expanding the existing Downtown interstate.

Said Knapp, “In the future people will look back and say this project was either a masterstroke that brought new economic vitality to the main economic engine of the State or a colossal missed opportunity, where we tried to accommodate highway traffic with blinders on – stunting the growth of the Capital City.

“This city and this state has so much going for it right now, we can’t afford to march into the future with blinders on,” Knapp continued. “We need a comprehensive, objective feasibility study of the alternatives, one that includes outside experts to fully gauge economic and community benefits of each proposed plan.”

Mark Beebe of Lancer+Beebe Architects, said, “The Rethink 65/70 Coalition believes there is a ‘legacy-level’ opportunity to leverage the urban interstate effort to create what could be the most important influencer on quality of life in Central Indiana for the next 50 years. We want this planned interstate project to be a beautiful asset to the city, that creates a spectacular front door for visitors, connects the community, and ensures we can attract quality investment and talent. We also know through studies of similar highway projects in cities across the country taking the ‘right’ design approach doesn’t have to mean it will cost more. In fact, implementing some of these examples of ‘best practices’ and ‘holistic, forward-thinking’ design could actually cost less here in Indiana.”