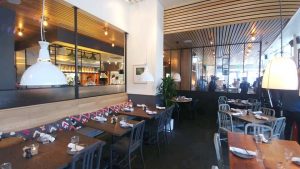 The culinary community has been buzzing ever since late-2016, when it was announced that Colorado entrepreneurs Kimball Musk, Hugo Matheson and Jen Lewin would open one of their farm-to-table eateries in the new Marietta building at Mass Ave and Vermont Street.

The effort will become reality on Tuesday, April 3, when Hedge Row opens with noted local chef Brad Gates at the helm.

Hedge Row is described by its owners as “a relaxed American Bistro featuring rustic dishes from a wood-fired oven.” It is named after the farm where Lewin, Matheson and Musk first sourced ingredients for their initial restaurant, The Kitchen, that opened in Boulder, Colo., in 2004.

Hedge Row is an American Bistro and full bar serving fresh, seasonal food. Its entire menu is sourced from American farmers, many within driving distance. Hedge Row will feature an all-day menu for lunch and dinner. A wood burning oven will give the menu a rustic boost with roasted beets, carrots, cauliflower, and chicken. 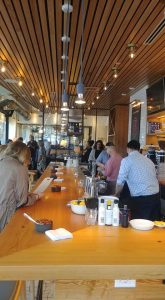 Among the other local food sources used by Hedge Row are Smoking Goose Meatery, Amelia’s Bakery and Tinker Coffee Co., all of Indianapolis, and Viking Lamb of Morristown.

Hedge Row has seating for 128 guests, plus another 62 on the patio. Complimentary parking is available evenings and weekends (directly behind restaurant, off of Vermont Street.)