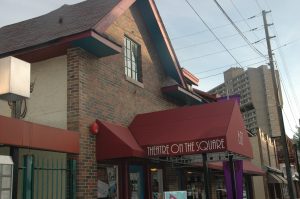 The two stages operated for many years by Theatre on the Square – but having been dark since last August when the TOTS organization collapsed – will once again host live entertainment.

The two stages will now be known as The District Theatre, and will be managed for at least the next two years by IndyFringe.

The development comes after Central Indiana Community Foundation took the lead in reviving the space in 2017 – creating a new not-for-profit and assuming ownership of the building, in a bid to preserve arts and culture in one of Indianapolis’ most important cultural districts.

“IndyFringe has a proven track record of managing and programming theaters and is already an integral partner to the art and culture district,” said Brian Payne, the Foundation’s president and CEO. Payne now also serves as chair of the The District Theatre’s Board of Directors.

“Over the years, IndyFringe has continued to grow their own theater and the IndyFringe Festival,” Payne continued, “and we feel confident that they will continue. We’re excited by the potential of this partnership to add important opportunities to performing arts organizations in the community.”

IndyFringe has 14 years of theater management experience plus a history of creating space for diverse audiences and performers. It is best known for its annual IndyFringe Festival, which has returned $1.4 million back to area artists since 2005 through a portion of its box office sales. The organization will maintain its current location on the “fringe” of Mass Ave. in addition to operating the space at The District Theatre.

Gary Reiter, IndyFringe board president, said, “Part of our mission is to support and assist independent artists. This new facility will further showcase Indianapolis performers, artists and designers, and provide them with a bridge to professional theater.”

After nearly 30 years as a mainstay in the Indianapolis arts community, Theatre on the Square faced costly building repairs and other issues that threatened the survival of the space. In August 2017, it announced a temporary closure and teamed with CICF to create a plan for long-term sustainability, including funding for several repairs.

Selecting IndyFringe as the new theater operations manager is the next step in energizing the space and preserving the diversity of offerings in the popular downtown district, Payne said.

The District Theatre board of directors will now focus on creating a long-term strategic and sustainability plan, as well as additional facility upgrades, while IndyFringe manages the day-to-day programming and operations. For more information about The District Theatre, watch IndyDistrictTheatre.org.