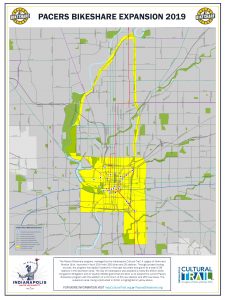 When news of the Pacers Bikeshare program first emerged in 2014, residents of Urban Times neighborhoods such as Cottage Home, Woodruff Place and The Old Northside wanted a piece of the two-wheeled action.

The original installation, however, focused on the immediate Downtown area. No more.

The Cultural Trail will host public input sessions starting in June to gather community feedback about station locations. Visit PacersBikeshare.org for more information and to stay up to date on public meetings and expansion plans.

“Pacers Bikeshare has transformed the way people travel in Downtown Indianapolis,” said Indianapolis Cultural Trail Executive Director, Kären Haley. “By expanding Pacers Bikeshare to neighborhoods and along the city’s bicycle network and transit corridors, we will bring affordable and convenient transportation to more of our city’s residents, neighborhoods and destinations.”

The federally funded expansion zones include adding station density in Downtown, expanding to near-downtown neighborhoods, and adding stations along the Monon Trail and other parts of the city’s bike network. Pacers Bikeshare expansion goals include growing the EveryBody Rides program – which provides subsidized bikeshare passes, bicycle education, and group rides for residents in low income situations – and being intentional about station locations in an effort to increase access for residents in need of affordable transportation.

The city was awarded a nearly $1 million Federal Highway Administration Congestion Mitigation and Air Quality grant for the Pacers Bikeshare expansion. A portion of the local match is provided by a grant from the Herbert Simon Family Foundation. In addition to the federally-funded expansion, Pacers Bikeshare will launch a business partnership program for business and property owners who desire Pacers Bikeshare stations on, or near, their place of business.