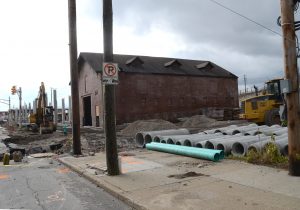 When Buckingham Companies designed Phase 2 of its expansive CityWay development, the decision was made to preserve the historic livery building, which dates to the mid-1800s and was historically home to horses and carriages.

Now relocated just a few hundred feet north of its original spot near the intersection of South and Delaware streets, the livery building will by next fall be home to Taxman Brewing Co., a firm headquartered in Bargersville.

The enterprise will bear the name Taxman CityWay Gastropub and Beer Garden. Maintaining the existing footprint of the livery, Taxman CityWay will feature a 3,000-square-foot outdoor patio, one of the largest in Indianapolis. Nathan Huelsebusch, Taxman’s president and co-owner, said they plan to preserve as much of the existing building as possible, including the exposed bricks and original wood rafters.

The family-friendly gastropub will seat 130 people inside, and up to another 200 outside on its patio. The gastropub will feature a seasonally changing menu that highlights local and regional farmers and artisans. The menu will be anchored by a wide variety of local beef burgers, seasonal sandwiches, Belgian-style French fries (commonly referred to as “frites”) and Belgian-style Liege waffles. Sixteen Taxman beers will be on tap, as well as wine and cider.

“This is the ideal location for us, with a terrific partner,” said Huelsebusch, calling CityWay “a beautiful neighborhood.” He noted the vibrant food and cocktail scene with Plat 99 and Nesso, the latter being the latest venture by Cunningham Restaurant Group.

Ryan Gallmeyer, vice president of development for Buckingham, said that Taxman adds a key ingredient to the CityWay neighborhood. “The livery building will once again anchor the Delaware Street corridor,” Gallmeyer said. “It’s a great example of historic preservation and new development.”

Taxman plans to begin construction and buildout of the restaurant in March 2019, with opening planned Fall 2019. CityWay 2.0 currently has an exclusive 13-story apartment tower with skyline views under construction, as well as new buildings along Delaware and Virginia streets.