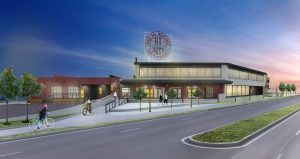 The mammoth Near Eastside building which has become a hub for artists is again continuing its transformation, thanks to a $4.1 million loan from the Local Initiatives Support Corp. of Indianapolis.

The funding has allowed Teagen Development, the century-old former industrial building’s owner, to proceed with its plan to renovate the southern end of the building which fronts East 10th Street between Massachusetts and Brookside avenues immediately east of Interstates 65-70.

That plan includes more front-facing businesses, reminiscent of the storefronts created when a section of the building was demolished to create parking and a through-way from the two avenues.

As announced just over two years ago, part of that space will be taken up by the owners of Fountain Square’s La Margarita, who plan to open a venue to be known as the Convivial Community Bar.

The southern end will also feature a performance venue and 11,000 square feet of additional commercial space. With preliminary demolition under way, Teagen President Larry Jones said some tenants could move in later in 2019.

Jones had sought a more aggressive timetable for renovation of the half-a-million-square-foot building he has owned for about four years. But as financing proved more difficult than expected, Jones and Teagen Vice President Rachel Ferguson didn’t stand pat waiting for change.

“In addition to adding nearly 100 tenants,” Ferguson said, “we’ve also put around $2.7 million (on top of the purchase price) into the northern end of the building, making long overdue repairs and renovations.”

Jones and Ferguson have tripled the tenant list, with more than 90 artists now calling the facility known as CCIC home. Other tenants include Ruckus Makerspace, 8th Day Distillery, Centerpoint Brewing and Lick Ice Cream. An unfinished space fronting the cut-away parking lot is used by the Indy Winter Farmers Market.

Ferguson said the financial mountain has been a tough one to climb, because the 12-acre building was losing more than $300,000 a year when Teagen bought it. “We’re proud of the changes we’ve been able to make on a shoestring budget, and proud to have been able to maintain rental rates that are below market and approachable to artists and small businesses.”