A group of neighbors go to a thought-provoking movie; or perhaps just an entertaining one. Outside, the friends end up standing outside the restroom, sharing their takes on the film they just consumed.

Or, by the end of March, they can go to the Kan-Kan Cinema & Brasserie, 1258 Windsor Street, tucked away in the hilly Windsor Park neighborhood, nestled up to Spades Park and just across a narrow street from the Spades Park Library. They can take in an independent film that otherwise might never have seen an Indy screen.

They can leave one of the screening rooms (there are four of them), but instead of scattering or heading to a neighborhood hangout, they can head straight to the tables both inside and outside the facility, and talk it over while sampling food or drink curated by Abby Meriss, chef of one of the most well-regarded eateries in the city, Bluebeard.

Yes, there’s an “and.” They can return some weeknight for a film club meeting, or a lecture by a university professor, or to see one of Kan-Kan’s “repertory series,” a group of vintage films grouped by theme. First off the blocks, fitting with the cinema’s opening: “The Rites of Spring.”

The bottom line, or perhaps the top line, is this: Kan-Kan Cinema & Brasserie is more than a movie theater, and more than an eatery. The developers – they label themselves founders and board members – are two father-and-son teams of Tom and Ed Battista, and Sam and Ben Sutphin.

What they are board members of is the Indianapolis Film Project, Inc., a not-for-profit formed to operate the building. The not-for-profit is led by Executive Director Louise Henderson, former festival director of Heartland Film Festival, and Daniel Arthur Jacobson, co-founder of Public House Cinema and himself a filmmaker.

Their goal: To not only offer first-run independent films, but to make Kan-Kan a cultural center.

Over four years ago,when the Indianapolis Film Project was first brainstormed, the idea was to renovate the historic former Christian Unity Missionary Baptist Church into what would be Kan-Kan Cinema. But structural issues with the historic (read that, old and decrepit) building scuttled that plan.

Instead, the partners have raised most of the $5.5 million needed to construct a state-of-the art building which will both change the dynamic of the Windsor Park neighborhood and nurture a burgeoning film-making culture which has to date no place to call home. (They are still fund-raising, including through memberships; see the panel at right.)

One of the neighbors’ prime concerns was parking. Kan-Kan features 59 off-street parking spaces, plus 35 bicycle racks (the theory perhaps being that people who dig independent films are the same sort who pedal). And Kan-Kan will encourage others to park not in front of neighboring houses but across the street alongside the park. If there is still a problem, Battista has committed to supporting the creation of a residential parking program such as exists in Lockerbie Square.

When the idea for a cinema first emerged, and before any city approvals, there was some push-back from Windsor Park neighbors. The loud voices, Ed Battista said, were in the minority, but loud nevertheless. To counter any skepticism, the Indianapolis Film Project brain trust has established a Community Advisory Board, an intentionally diverse group representative of the entire Eastside.  That group will inform programming and the development of special events, Ed Battista said.

Further, Kan-Kan Cinema will host a Saturday morning film series for Windsor Park children, with tickets at just $5 – with a library card. (But that’s no problem, Louise Henderson explained: No library card? Well, here’s a form, so you fill it out and walk across the street to the Spades Park Library. Voilà.)

In addition, residents of Windsor Park, Spades Park will receive a free basic Kan-Kan membership and 50% off any of the higher memberships. A postcard will be sent to those residents that they can bring to the theater and redeem for a free membership. That offer will also go to reside in the Jefferson Apartments on East 10th Street, as well as other affordable housing sponsored by the John H. Boner Neighborhood Centers.

The leaders of the Indianapolis Film Project want their effort to enhance, not detract, from their surroundings. “This is a really cool neighborhood in Indianapolis that’s been flying under the radar,” Jacobson said. Added Henderson, “It was a deliberate decision to locate here – to help support the library and Spades Park, and to address quality of life issues.”

Battista’s opinion: “This only works if the community embraces us.”

But back to the idea of a mecca for film enthusiasts. More than that, really. A place for budding filmmakers to be nurtured, even taught.

There are four elements to the organization’s mission – to teach, to be a convening space, to promote community outreach, and to spark conversation. To achieve the latter, the Brasserie comes into play. Battista said the 100-seat space (both indoors and out) is intentionally a relaxed one, “so people will hang out, talk about film.”

The building also includes meeting rooms, even a private event space with balcony overlooking the park and library. And two of the screening rooms can be converted into mini-lecture halls. The project is working to establish relationships with IUPUI and other local universities. There will be both individual lectures and lecture series “for the intellectually curious,” Jacobson said.

The team is working to establish a partnership with nearby Arsenal Technical High School for film classes – with the idea of letting students know that filmmaking can be a career, giving them a place to meet new and experienced filmmakers.

Henderson said Kan-Kan will be a year-round venue not only for film festivals, but “a place the film community can pull together, grow.”

She is working on a year-round association with Heartland Film Festival, her former employer, as well as with the Indianapolis Film Festival – giving both festivals a chance to expand to Downtown screens. As for Heartland, expect this year only a minimal involvement which will grow down the road.

Other ideas include showing short films on Thursday evenings and a “guest curator” program on second Tuesdays.

Kan-Kan Cinema & Brasserie, by the way, gets its name from a somewhat obscure term coined by Kurt Vonnegut in his novel, Cat’s Cradle. (In the same vein, the restaurant the Battistas founded in Fletcher Place, Bluebeard, is named after a Vonnegut novel.)

As a not-for-profit, she added, the Indianapolis Film Project can nurture and even provide funding for young filmmakers. And provide space for reasonable rents. And, she added, provide a venue where issues both local and global can be addressed.

Speaking to the potential to be offered by diverse young filmmakers, “those stories still aren’t being told,” she said.

For most of us, though, Kan-Kan will be about viewing films and eating food. Chef Abby Meriss of Bluebeard fame can be counted on to offer unique cuisine at the Brasserie, while the Cinema portion of Kan-Kan will offer similar uniqueness. “We want to bring in films you’ve never heard of,” Henderson said, understanding the risk in seeking audiences. “The audience will trust is – if we do this right.

Abbi Meriss is the highly acclaimed chef and owner of Bluebeard restaurant, but she’s long had a hankering for another type of eatery.

“I’ve always wanted to open my own brasserie,” she said, explaining that a brasserie is a café which serves the same menu the entire day, usually defined as simple, hearty fare.

And so when her landlords at Bluebeard – Tom and Ed Battista – came up with a plan to open a cinema with an eatery attached, Meriss was all in. She will operate a 90-seat restaurant in the Kan-Kan Cinema & Brasserie, with another 30 seats to be available on the patio when the weather turns.

The Brasserie isn’t just for movie-goers both before and after a film; anyone can walk in and partake of the cuisine.

The word brasserie being of French derivation, it’s no surprise that the Kan-Kan Brasserie will be inspired by French (as well as other European) cuisine.

At press time, Meriss wasn’t ready to give an extensive rundown of the menu, but did list a few staples – a seafood tower, mussels, a sausage known as boudin blanc, steak frites, oysters Rockefeller, and “my play on shrimp cocktail.” And, of course, bread from Amelia’s.

The Kan-Kan Brasserie will also boast a full bar, with 20 beers on tap, wine and cocktails, to be managed by Ryan Gullet.

Meriss is also in charge of the cinema’s snack bar, which will feature among other things Indiana popcorn with stylized toppers available, as well as various candies.

After a series of soft openings, the Brasserie’s hours will line up with the cinema’s – from 11 a.m. to 11 p.m. seven days a week.

The new construction housing the Kan-Kan Cinema & Brasserie isn’t the only element of the project being completed by Tom and Ed Battista and Sam and Ben Sutphin.

Immediately south of the new building sits three cottages under full renovation. All front on Nowland Avenue. The closest cottage will house an Amelia’s bread outlet featuring a coffee and espresso bar. Ed Battista said Amelia’s should be open by May. Another of the structures will house a shop operated by Martha Latta, owner of Handmade Promenade and the creator and printer of the Sunday Afternoon Housewife brand, of a collection of state pride accessories and tee shirts for men, women and children. 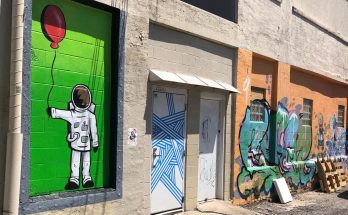 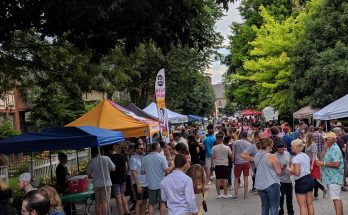 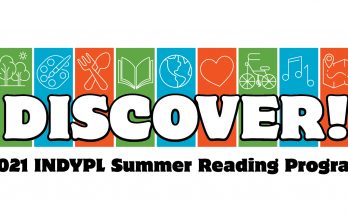