This installment of History 301 originally appeared in the February 2014 issue of Urban Times.

Indianapolis, these days, has a growing reputation as a city of fine independent restaurants. This is certainly welcome and newsworthy for those of us who lived here during the years when The Peppy Grill was just about the only late-night or Sunday-morning option for a meal. But our forebears, in the years before chain restaurants captured much of Downtown, expected to receive a fine meal prepared by an owner-operator when they found the money and opportunity to dine out in the Capital City.

It seems that early Indianapolis settlers, especially the women who spent most of their time in the domestic realm, took most of their meals at home. Although there were taverns and inns where travelers must have dined out, few records survive to tell us what was served. One exception comes in Jacob Piatt Dunn’s “Greater Indianapolis.” He describes a Fourth of July dinner at Hawkins Tavern on the Westside of Indianapolis. Dinner was centered on a “barbecued buck that had been killed the day before by Robert Harding.” Piatt didn’t mention any side dishes, however, other than “ample spirit of the maize,” with which 14 toasts were made.

When Englishman J. Richard Beste visited Indianapolis with his family in 1853, they seem to have stayed long enough only to snack lightly at a “temperance hotel barroom” on tea and sherbet.

By 1872 William H. “Pop” June was offering delectable oysters at Pop June’s Shell Oyster Bay on South Illinois Street. “Hyman’s Handbook of Indianapolis,” published in 1907, noted that Pop June’s was an Indianapolis landmark long known for its high-quality food. The restaurants offerings included steaks, pork and fish and oysters and clams all year-round. “All men who ‘know the town’ can tell you the place to eat and strangers are taken there just to give them a treat,” according to Max Hyman’s boostering publication. 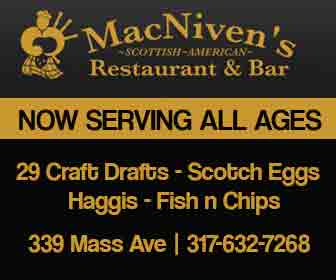 The New Year’s Day 1884 offerings at the Bates House Hotel were mouth-watering. Lucky diners could enjoy a five-course meal with options such as raw oysters, boiled halibut, ham in champagne sauce, sirloin of beef, pineapple fritters in brandy sauce, mashed or boiled potatoes, and for dessert, mince pie, chocolate jumbles, or steamed pound pudding with wine sauce, plus an array of fresh fruits, nuts and cheeses.

In 1900, John Wesley Laughner converted his ice cream parlor, which had been located at 4 Indiana Avenue since 1888, into Laughner’s Dairy Lunch, a new cafeteria-style restaurant where customers made their choices of meatloaf, roasted chicken and mashed potatoes from a very modern-seeming glass cabinet. Laughner’s was also an unparalleled success opening several concession stands at Riverside Amusement Park, and the Indianapolis Motor Speedway before expanding into the cafeteria giant we saw in our city until the last one closed about 2000.

Another long-standing restaurant tradition began just after the turn of the 20th Century. Joe Stahr opened St. Elmo Steak House, a tavern and buffet, in 1902. The restaurant still operates at its original location and still offers its trademark shrimp cocktail.

In 1904 when the Chinese prince Pu Lun visited Indianapolis, he dined on chop suey, ice cream and beer at the Moy Kee & Co. Chinese restaurant at 508 E. Washington St. The visit was so memorable a photograph of the occasion is archived in the Library of Congress.

In 1930 Henry Mewborn introduced Indianapolis to the drive-in with his Peacock restaurant at 38th Street and Massachusetts Avenue, according to the Encyclopedia of Indianapolis. For the first time, citizens could dine out while eating in their cars. Two years later the Wigwam, later renamed the TeePee, opened near the Indiana State Fairgrounds. Cherry and vanilla colas, “Big Chief” burgers and French fries and beet salad were some of the Wigwam/TeePee staples.

The Oasis, on Indiana Avenue, served vegetable stew, potatoes and bread and butter for 20 cents to its primarily African American clientele during the Great Depression. In 1935 the James Whitcomb Fountain Room offered an extensive menu, which included a plate of baked ham and smoked tongue, rolls, horseradish sauce, potato salad and a crescent roll for only 35 cents. Banana cream pie was an additional 15 cents, but a chocolate éclair could be had for only a dime.

The city’s Sam’s Subway, closed for decades, has its own Facebook page. A menu posted there for the week of Dec. 29, 1941, shows that choices were eclectic and affordable. Baby beef liver smothered with onions (yum), chop suey or American spaghetti and a drink could each be had for 50 cents or less. Sam’s was named for owner Sam Hochman, who became a local restaurant mogul with a number of cleverly conceptualized restaurants bearing his name: Sam’s Attic, Sam’s Basement, Sam’s Caves and Caverns – each decorated to match its name. Countless young couples went on their first dress-up dates at one of Sam’s spots over the years, including a young girl from Greensburg, who had her first taste of duck at Sam’s Attic circa 1976.

It’s hard to know when the first national chain restaurant opened in Indianapolis, but when it happened it was probably a burger joint. McDonald’s was here by the 1950s. Steak and Shake arrived in 1954.

In 1957 Indianapolis birthed a national chain restaurant. Frank P. Thomas a local entrepreneur developed a hamburger grilling conveyor belt system that he put into service at the Little America Amusement Center here before opening the first Burger Chef in 1959 on 16th Street. His 15-cent burgers were a hit. By 1966 there were 500 Burger Chefs in the Midwest. Thomas sold his business to General Foods in 1968 for $16.5 million.

The taste buds of Indianapolis seem to be evolving back from the giant chains to local eateries featuring locally grown vegetables, in-house baked bread and even locally produced meats. Any day now we may be able to pull up a chair at a local place where we can order barbecued buck killed the day before. 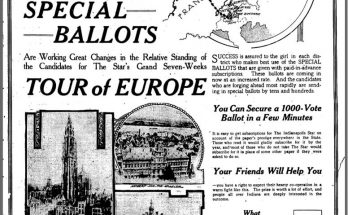