In light of the 2020 Tony Awards being postponed indefinitely, The Cabaret is releasing archived performance footage of Tony winners and nominees who have graced The Cabaret’s local stage thanks to the Glick Philanthropies Broadway at The Cabaret Series.

Twelve different performers will be featured, all of whom hand-selected songs from their Cabaret performances to be released over the course of six days, beginning on Sunday, June 7, (the originally scheduled date for the Tony Awards).

The carefully curated collection of songs will be available to view on The Cabaret’s YouTube channel (www.youtube.com/thecabaret121) and website (www.thecabaret.org) in hopes of keeping the spirit of Broadway’s biggest night alive.

“The shuttering of venues means we have already lost one of the things that we love – live performance, which we rely on to enlighten us, connect us, and to comfort us,” said Shannon Forsell, artistic director and CEO. “And now, with something as iconic as The Tony Awards being cancelled, we thought it was time to offer a new form of entertainment and celebration of the artists we love so much.

“We have always compared the intimacy of cabaret to that of having a Broadway star, jazz diva, or chanteuse singing at a cocktail party in your living room,” Forsell continued. “Now that can literally be the case. It will be a while until we can all come together in person, but we are doing all we can to recreate that feeling of togetherness.”

One way to recreate that feeling, The Cabaret suggests, is by hosting a “virtual cocktail party” with your friends (or, if you’re a Cabaret regular, your usual tablemates) before or after watching the archived footage. Platforms like FaceTime, Zoom, Skype, or Google Hangouts make it easier than ever to recreate the feeling of talking face-to-face and enjoying a drink together.

While the videos are free to enjoy, viewers are encouraged to make an online donation to a cause that serves those deeply affected by this crisis, such as The Indy Arts & Culture COVID-19 Emergency Relief Fund, The Actors Fund, or The Cabaret.

5 p.m. – Lindsay Mendez. Her 2019 performance at The Cabaret. Mendez received the 2018 Tony Award for Best Featured Actress in a Musical, a Drama Desk Award, and Outer Critics Circle Award for her performance in Carousel.

Noon – Anthony Rapp & Adam Pascal. A 2016 performance at The Cabaret. At the 1996 Tony Awards, Pascal was nominated for Best Performance by a Leading Actor in a Musical for RENT. Rapp has received several nominations and wins including a Drama Desk Award, Screen Actors Guild Award, and was a finalist for The Advocate’s 2017 Person of the Year Award.

Noon – Jennifer Holliday. Her 2018 performance at The Cabaret. Holliday won the 1982 Tony Award for Best Leading Actress in a Musical for her portrayal of Effie White in Dreamgirls. She also received a Grammy Award for her recorded version of And I Am Telling You I’m Not Going, as well as Drama Desk and Theater World awards for her performance in the original Broadway production.

Noon – Kate Baldwin. Her 2019 performance at The Cabaret. Baldwin was nominated for her performances in Finnian’s Rainbow and Hello, Dolly!

Noon – Norm Lewis. His 2018 performance at The Cabaret. At the 2012 Tony Awards, Lewis was nominated for Best Performance by a Leading Actor in a Musical for Gershwin’s Porgy and Bess.

5 p.m. – Rachel Bay Jones. Her 2018 performance at The Cabaret. Bay Jones received the 2017 Tony Award for Best Featured Actress in a Musical for her performance in Dear Evan Hansen.

8 p.m. – Laura Benanti. Her 2018 performance at The Cabaret. Benanti won the 2008 Tony Award for Best Featured Actress in a Musical for Gypsy, and has been nominated for several other performances in Swing!, Into the Woods, Women on the Verge of a Nervous Breakdown, and She Loves Me. 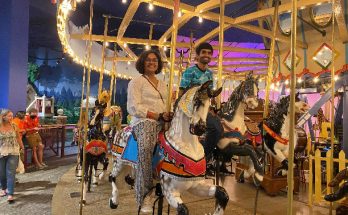