Downtown residents may soon have a place to take canine friends thanks to the recently launched crowdfunding campaign to create a dog park next to Immanuel United Church of Christ in the Bates-Hendricks neighborhood.

If the campaign reaches its $33,000 goal by Sept. 25, the Indy Dog Park Co. will receive a matching grant of $33,000 from CreatINg Places program offered by the Indiana Housing and Community Development Authority.

The funds raised will be used to create a space for dogs and humans to gather and play, the first of its kind in Downtown Indianapolis. The park will include an area for small and large dogs and partial turf to allow for use during the winter.

The campaign is sponsored by the Indiana Housing and Community Development Authority (IHCDA) and offered through the crowdfunding platform developed by Patronicity.

The campaign is led by the Indy Dog Park Co., a non-profit created to advocate and create a dog park in Downtown Indianapolis. The non-profit’s partnership with Immanuel Church comes after years of searching for suitable land.

“We are so excited to be partnering with Immanuel United Church of Christ to open the first ever public Downtown dog park in Indianapolis,” said Erica Ballard, executive director of the Indy Dog Park Co. “We’ve been working on this for over three years now and haven’t stopped because we know how crucial these places like a dog park are for our community”.

“Collaboration is critical to development.,” said Bridget Anderson, director at Patronicity. “Crowdfunding allows residents and neighbors to invest in the betterment of their public spaces and this campaign will allow more stakeholders to show their support”.

ARTWORK ABOVE: A rendering of the Indy Dog Park, which will be located immediately west of Immanuel United Church of Christ on the northwest corner of Prospect and New Jersey streets in the Bates-Hendricks neighborhood. 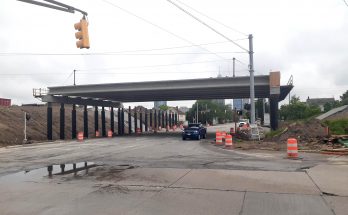