Wednesday’s opening of the Bottleworks Hotel and next month’s opening of The Garage Food Hall have rightfully garnered much publicity, including as the cover story of the December 2020/January 2021 edition of Urban Times.

But there is much more of the massive, $300 million development to come as it consumes the entire 12-acre site.

The hotel and food hall both sit in well-refurbished historic Art Deco structures which date to the 1930s. The remaining one-story structure clad in terra coita – sitting immediately across the newly reopened Carrollton Avenue from the hotel entrance –will be home to a bowling establishment known as Pins Mechanical Company.

When the Wisconsin-based Hendricks Commercial Properties brought the project to the Indianapolis Historic Preservation in 2017, they estimated the historic structures were clad in 16,000 terra cotta tiles, 70 percent of which required some restoration or replacement.

But in addition to those restored Art Deco terra cotta masterpieces, the Bottleworks District also includes:

RETAIL COMING / In addition to the Bottleworks Hotel, the former Coca-Cola building (used for many years by Indianapolis Public Schools until this project rolled around) will also house Modita, a Cunningham Restaurant Group concept which can be accessed directly from the hotel; Sundry and Vice, a cocktail bar; Blue Collar Coffee Co.; Good Neighbor, a clothier; W Nail Bar; and Woodhouse Day Spa. The Garage Food Hall will feature at least 20 vendors, most serving food but also including Pumkinfish, the “gift and goodies” shop formerly located in the 400 block of Mass Ave, and Square Cat Vinyl, a second location for the Fountain Square staple. Also in The Garage will be Becker Supply Co., selling outdoor apparel, and Brick & Mortar Barber Shop.

Other enterprises to be located in other Bottleworks structures include Drybar, Yoga Six and Platt Collective. 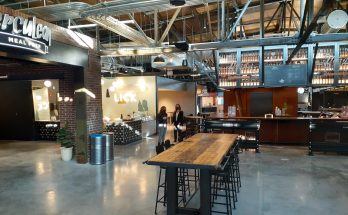 THIS JUST IN: The Garage food hall poised to open in Bottleworks District 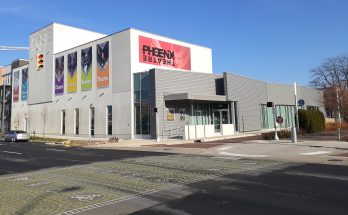 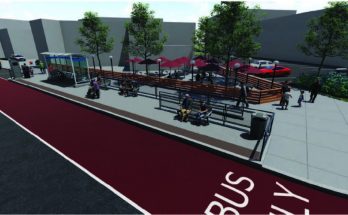